Why PA’s New Bloody Butcher Bourbon is so Bloody Good 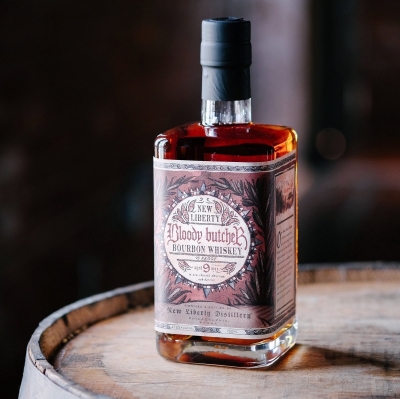 As Pennsylvania’s craft distilling industry matures, we’ve finally begun to see more aged whiskies emerge from their barrels with the ability to capture a genuine taste of local terroir. Bloody Butcher Bourbon, the latest issue from the New Liberty Distillery in Kensington, is one of best to date, combining all local grains with some genuine distilling finesse. New Liberty’s Rob Cassell turned to Doylestown’s Castle Valley Mill for the deep red kernels of Bloody Butcher corn, a magenta-purple heirloom varietal that’s not well-suited to industrial farming (its skinny stalks can’t handle a fall storm) but that is noted for its fruitiness and an oily richness that’s prime for grits and whiskey. It makes up 68 percent of this mash bill, well exceeding the 51 percent corn minimum required to be called bourbon. And that extra intense dose of corn accounts for the deep cherry tones and buttery mouthfeel of the whiskey, which is remarkably smooth and drinkable neat, even though this 95-proof bourbon blends spirits that range from just nine months to two-and-a-half years old, aged in a variety of barrel sizes for different doses of oak. A 28 percent portion of malted rye, plus a small hit of barley from Deer Creek Malthouse in Glen Mills, balances the corn’s sweetness with notes of pipe smoke, bitter cocoa, and spice.

“I like to say that I put ‘two Marks’ inside the bottle,” says Cassell, “since I everything that goes inside is from…Mark Brault from Deer Creek and Mark and Fran Fischer from Castle Valley. Not sure exactly why … I just find that funny.” At the very least, I find those grain masters’ contributions have added up to a seriously delicious new whiskey, one that also wears a third mark – a stamp of Pennsylvania grain transformed into liquid gold.