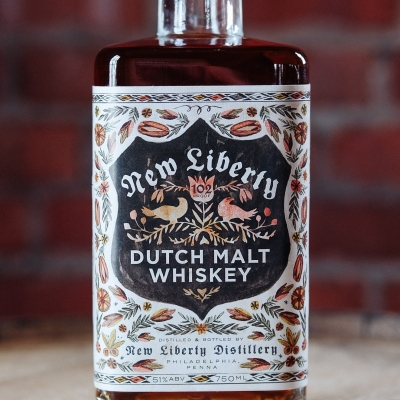 “Everybody thinks I’ve been doing nothing for the past two years,” says Robert Cassell, the master distiller who left Philadelphia Distilling (where he was cofounder and gin master behind Bluecoat) in 2014 to launch the New Liberty Distillery in Kensington.

But that’s hardly the case. In fact, Cassell has been distilling nearly two tons of local grain each week, laying down whiskey to age in barrels between the stalls of a historic stable behind the Crane Arts Center.

Making good whiskey takes time. But with a sizable stock now having bided its time, with 2,000 cases ready this year, and 3,000 more still aging, New Liberty is about to make its move.

Its first aged-whiskey release this week, Pennsylvania Dutch Malt, bodes very, very well. Made from 100 percent local barley from Deer Creek Malthouse in Glen Mills, the Dutch is something of an American reply to single-malt Scotch — and also considerably different in its char-forward use of new oak barrels and a darker Münich-style roast on the malt.

With a blend of spirits ranging from 1½ to 2 years of age, it’s obviously young compared with its Euro counterparts, and I still taste the Grape Nuts cereal notes of that good Pennsylvania grain at its core.

But its 102-proof power is also admirably well-behaved, and with a splash of water, the complexity of other flavors pushes forward in the glass, with dark chocolate and spice, the roasty sweetness of a burnt sugar cube, and then the lingering tang of dark stone fruit to keep it lively. With as many as 10 new spirits planned to come this year, Cassell will likely be busier “doing nothing” than ever.