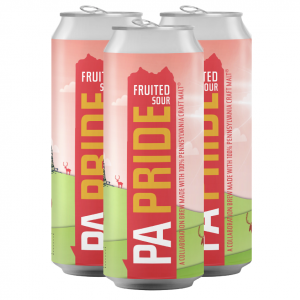 Prepared by Breweries in PA: After five successful beer releases, the “PA Pride” series returned with a Fruited Sour style beer throughout Pennsylvania on Friday, June 24th (find it HERE!) For more than a year PA Pride has become synonymous with highlighting the love and pride for the Keystone state and the agriculture industry. The fruited sour version of PA Pride will showcase the variety of flavors found throughout PA agriculture using locally grown ingredients with fruit additions giving this beer its full-bodied flavor.

Locally made malt from Deer Creek and Southern Aroma hops from King of Prussia, PA based Zuckerman Honickman are featured as some of the key ingredients that bring this beer to life. Peach and Pear were used to highlight the robust fruit flavor.

PA Pride Fruited Sour clocks in at 5.7% and will be packaged and released in 16-ounce cans by more than 20 breweries in Pennsylvania (see a map of where here) that have joined the collaboration. In addition to the packaged cans, several of the breweries carrying this beer will also have it available on draft. As with all the previous releases, the label for this beer features artwork that encapsulates the Pennsylvania agriculture landscape.

In addition to some of the locally made ingredients being used to produce this beer, Pennsylvania’s own “Philly Sour Yeast” will be utilized as well. Philly Sour Yeast is a special yeast that was isolated in West Philadelphia by a research team from University Of The Sciences led by Dr. Mathew J. Farber. As the University describes, this yeast “yields beers with bright lactic acidity balanced by a slight sweetness and mouthfeel from glycerol produced during fermentation.”

For PA Pride Fruited Sour, small additions of pale wheat malt and rolled oats were added for body and mouthfeel. On this canvas, the tartness and stone fruit notes created by the Philly Sour yeast blend with refreshingly juicy peach and pear puree. Southern Aroma hops add the subtlest hint of a floral earthiness to the beer’s aroma. The flavors of PA Pride Fruited Sour hearken to classics of summer like sour-sweet peach ring gummies and the elegant sparkling Bellini and will deliver maximum summer refreshment in a can.

This fruited sour beer is already the second PA Pride beer to release in 2022. In addition to these releases, a Multi-Grain Saison and Amber Lager are planned to release to the public throughout the remainder of the year. Be sure to follow BreweriesInPA.com/PAPride for all current and future release details, including a map of all breweries which will have these beers available for sale.

Meanwhile, there’s still time to try the PA Pride 6.0’s predecessors: PA Pride Double IPA, Hazy Pale Ale, Pilsner, Kölsch and Hazy IPA are available on their own, in a mixed 4-pack, or in mix-and-match 24-pack cases. You can also make your own PA Pride 5.0 at home with the PA Pride 5.0 Double IPA Homebrew Kit!