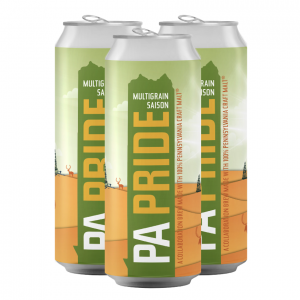 From Breweries in PA: For the third time in 2022 (and seventh time overall) breweries from all across Pennsylvania have teamed together on a special beer collaboration that celebrates the rich agricultural history the state is well known for. The “PA Pride” beer series has become synonymous with connecting Pennsylvania craft breweries for more than a year. After six successful releases, the series returns with a special Multi-Grain Saison that released at more than 20 craft breweries in Pennsylvania. Order it HERE.

This Multi-Grain Saison is brewed celebrating locally made grain and malt from Deer Creek Malthouse (West Chester, PA) and hops from King of Prussia, PA based Zuckerman Honickman as well as GEMS Farms in Carlisle, PA. These ingredients will showcase the robust flavors being produced by Pennsylvania’s deep agriculture industry.

The beer will be packaged and released in 16-ounce cans by over 20 breweries in Pennsylvania that have teamed up as a part of the collaboration. In addition to the packaged cans, several of the breweries carrying this beer will also have it available on draft. See a map of where to find it.

Production for a majority of the Saison brew took place at Bald Birds Brewing in Audubon, PA.  Patrick Countryman, Head Brewer of Bald Birds described the version of this beer as “a Belgian-style saison containing a complex, earthy blend of barley, rye, buckwheat, and sorghum, and with floral and grapefruit notes from PA-Grown Comet hops from GEMS Farms. In addition, customers can expect subtle notes of pepper and spice with a touch of sweetness.” This version of PA Pride offers consumers a balanced flavor profile with a thick and chewy body that transitions to the crisp, dry finish of a classic Saison.

This Multi-Grain Saison is the third release in the PA Pride series in 2022. In addition to these releases, an Amber Lager is planned to release to the public towards the end of the year. Be sure to follow BreweriesInPA.com/PAPride for all current and future release details, including a map of all breweries which will have these beers available for sale.