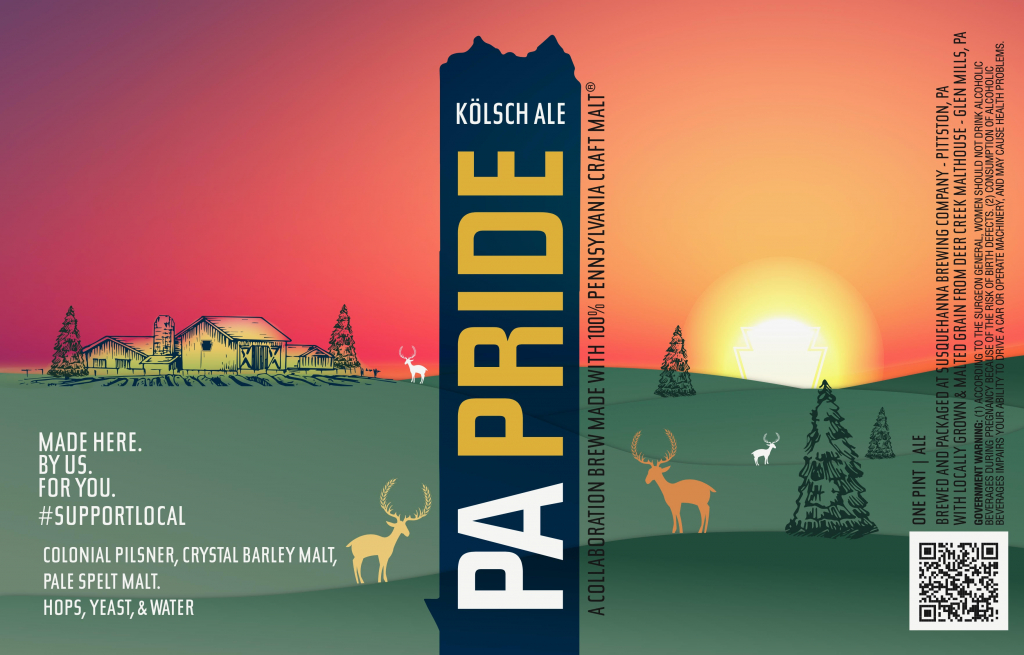 In a continued effort to connect the Pennsylvania craft beer community with local agriculture, Deer Creek Malthouse and Breweries In PA have once again teamed up following the success of the popular PA Pride collaboration beer.

The original “PA Pride”, a Hazy Pale Ale beer released in November 2020, was named after the love and pride we all share for the keystone state, while showcasing 2-row barley and organic spelt grown right here in the Commonwealth. The beer was released all over Pennsylvania and became an instant success, garnering very high ratings from the popular craft beer review site Untappd.

“PA Pride 2.0” will release to the public at over 30 craft breweries across Pennsylvania  on Friday, February 5th, 2021. This version of the beer was inspired by the Bohemian style-Pilsner and brewed with Pennsylvania grown and traditionally floor germinated 2-row barley and hard red wheat. Only noble Saaz hops were used. This clean, crisp lager clocks in at 5.1% ABV and will be packaged and released in 16- ounce cans by the many Pennsylvania breweries who have joined together for the beer collaboration. Cans of PA Pride 2.0 feature some of the same Pennsylvania imagery as the original PA Pride label, such as the state outline, the iconic keystone, and the barn that can be found at Deer Creek.

Along with the release of this beer, Deer Creek Malthouse and Breweries In PA will co-host a virtual happy hour that is open to the public and will include the farmers and many of the brewery collaborators on this project. The virtual happy hour will be held Thursday, February 11th.  Stay tuned for more details coming soon!

We are offering a limited number of PRE-ORDERS HERE

“Pilsner malt is one of the most natural yet difficult ingredients to produce. It IS the grain. You cannot disguise characteristics from cultivation in the field or germination in the malthouse. It is lightly kilned to preserve enzymes and the natural flavor/aroma from the grain without introducing too much color. The malt for this recipe was made using traditional floor germination techniques, which is how malt for this style would have been produced by the Plzen (Pilsen) pioneers in Bohemian brewing culture.”

“Not to sound cliché, but nothing makes us prouder than to support the Pennsylvania craft beer industry. So, to be a part of a beer like this that brings together so many from an industry we love is done with immense pride. The previous version of this beer was so well received in communities all across Pennsylvania, and we believe version 2.0 will live up to that legacy. Plus, who doesn’t love a crushable Pilsner beer? Win win!”

“I’m excited to work on this statewide project with Deer Creek Malthouse. There are a lot of breweries struggling in this current environment and this is one way we can work together and show our support while highlighting our great brewing industry”