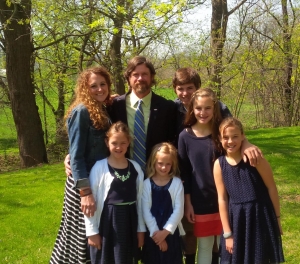 Matt King, owner of Pleasant View Farm in Chester County, had never planted small grains on his land before—but when Deer Creek Malthouse approached him with the idea of growing malting barley, he was eager to give it a shot.

“It was something fresh and new and exciting,” Matt explains. “We planted ten acres of barley to start.”

A third generation farmer, Matt bought Pleasant View Farm from his parents in 2006 and has since been raising organic broiler chickens for Purdue and a small herd of angus beef cattle. The Kings also grow cash crops such as corn and soybeans, which produce hay for livestock. Matt emphasizes that farm life is a family endeavor and gives credit where credit is due. “My wife is a critical part of the operation, and the kids help where they can. Everybody’s involved in some capacity, whether it’s caring for our small flock of egg-laying chickens, or stacking straw—everybody shares the tasks.”

The idea to grow malting barley was appealing not just for its novelty, but because it fit well into the crop rotation. Small grains work well as cover crops and can be planted right after soybeans are harvested, providing erosion control during winter and spring rains. But Matt’s experience growing barley on the farm has come with its fair share of difficulties.

“The obvious challenge for farmers is the weather. Our greatest task was to find a variety of barley that matches the climate and weather conditions here in this part of the world.”

He explains that, unlike Montana, Idaho, and other states more out west where malting barley has typically been grown, Pennsylvania’s climate is markedly wetter. Barley should come out of the field at around 12.5% moisture—it must be harvested dry for storage purposes. And straw, the byproduct of small grains, needs to be baled dry as well. (“We have a strong population of equestrian communities nearby, and the straw is high value for horse owners.”) During seasons of heavy and frequent rainfall, there are more delays and smaller windows of opportunity to harvest; a delayed harvest means a delay in the subsequent planting of cover crops.

However, Matt has not had to face these challenges alone. He has appreciated help from the Deer Creek maltsters throughout the barley-growing process:

“Deer Creek Malthouse is out trying to stimulate small business and give ways for small farms to be viable in a world that’s all about bigger, better, and faster. There’s a quality piece in that mix, and that’s what they’re trying to bring to light. They check in throughout seasons, inspecting crops, giving recommendations for spraying and fertilizing… They collaborate with folks at Penn State and have definitely partnered with us along the way.”

Farming has taught Matt a few valuable life lessons, one of which is to be flexible in a world that wants to nail everything down and know exact outcomes. He notes that even with all the business sense you could possibly have, there are a lot of variables to deal with: extreme weather, plant pests and diseases, worries about mold, and muddy fields, to name

a few. Most people would be deterred at the idea of so much hard work with no guarantees, but Matt finds that the attraction of farming is overcoming the challenges involved in it. He adds that the end result is a plus, too.

“You can break out a six-pack of beer and be able to say, ‘This is a product of what was raised here on the farm,’” Matt says with pride. “That is what makes it worthwhile: to be part of something that you get to enjoy and share with friends.”